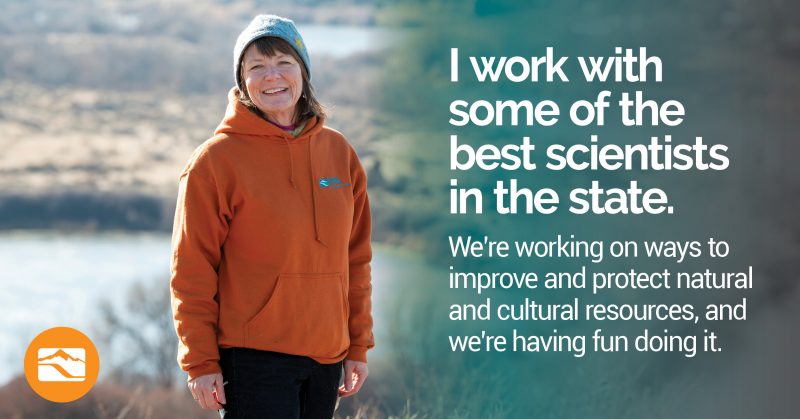 “As the first in my family to move West, I was drawn by the vast expanses of wide-open wilderness and the sense of possibility the West still engenders,” Allison said. “My western sojourn and eventual Idaho Power employment embodies my sense of adventure and delight in trying new and challenging things.”

As a non-traditional student, Allison started college as a 20-something single mom, finishing her undergraduate degree at the University of Maine. She earned her Master of Science in Resource Management at Antioch New England Graduate School in New Hampshire. Following a brief stint working in state transportation permitting, she joined a small consulting firm doing permitting, Federal Energy Regulatory Commission (FERC) licensing and compliance projects for a variety of utilities across the country.

“I worked in some amazing places for some great utilities, including in Idaho and Oregon,” Allison said. “I fell in love with the Northwest and knew my family would feel the same. So I suggested opening a satellite office in the West.”

After a few years running the firm’s West Coast office, based in Portland, a close friend (and Idaho Power employee) encouraged Allison to consider leaving consulting to join Idaho Power.

“I was living in Oregon and couldn’t picture myself moving out of the trees and rain to make a home in the desert,” she said. “But the more time I spent in Idaho getting to know Idaho Power, the great folks who work here, and the amazing environmental work Idaho Power does, the more convinced I became about this great opportunity.”

Whether touring Hells Canyon, visiting the Swan Falls Museum, traveling through eastern Idaho, or meeting folks who reminded her of her hardworking, honest and straightforward friends and family from Maine, everything pointed toward making the move.

“I’ve been in Idaho and with Idaho Power for almost seven years now,” Allison said. “I’ve never second-guessed that decision.”

It’s incredibly difficult for Allison to pick just one thing she loves about her job and the company.

“As the Terrestrial Environmental Manager, my team consists of science professionals who are committed to doing their best, not just because they get a paycheck, but more so because they are passionate about their disciplines and the work they do at Idaho Power,” she said.

“Whether developing habitat management plans that benefit a variety of species and ecosystems, protecting cultural and historic resources, or ensuring our transmission and distribution lines are maintained in an environmentally sensitive manner, the folks on my team are consummate, passionate professionals. They’re also just plain fun – I see them as extended family rather than employees and colleagues.”

From a corporate perspective, Allison said she feels incredibly lucky to work for a company fully committed to environmental stewardship and compliance.

“Of all the utilities I worked for as a consultant, Idaho Power is one of very few companies with such a strong environmental ethic,” she said. “It shows in the resources they invest in our department, our people and our community as a whole.”

Allison said her path may have meandered before she got to Idaho Power, but she’s glad it led her here!

“If you’d told me I’d be happily living in the high desert of Idaho working for a utility company, I would have laughed and said you were crazy,” she said. “I now recognize that everything I worked for and held dear was leading me here. My office extends from American Falls to Hells Canyon. I work with some of the best scientists in the state. We’re focused on ways to improve and protect natural and cultural resources, and we’re having fun doing it.”

So why is she planning to stay at Idaho Power? In a word, ownership.

“As a consultant I flew in, did work for a client and flew back out. I never had the opportunity to watch my projects grow, mature and reach fruition. I never had the chance to see the long-term benefits of the work for a company or its stakeholders. Also, while I’ve made many dear friends in the industry, I never was able to stick around long enough to truly understand what it means to be part of the utility community. Idaho Power feels like family,” she said.