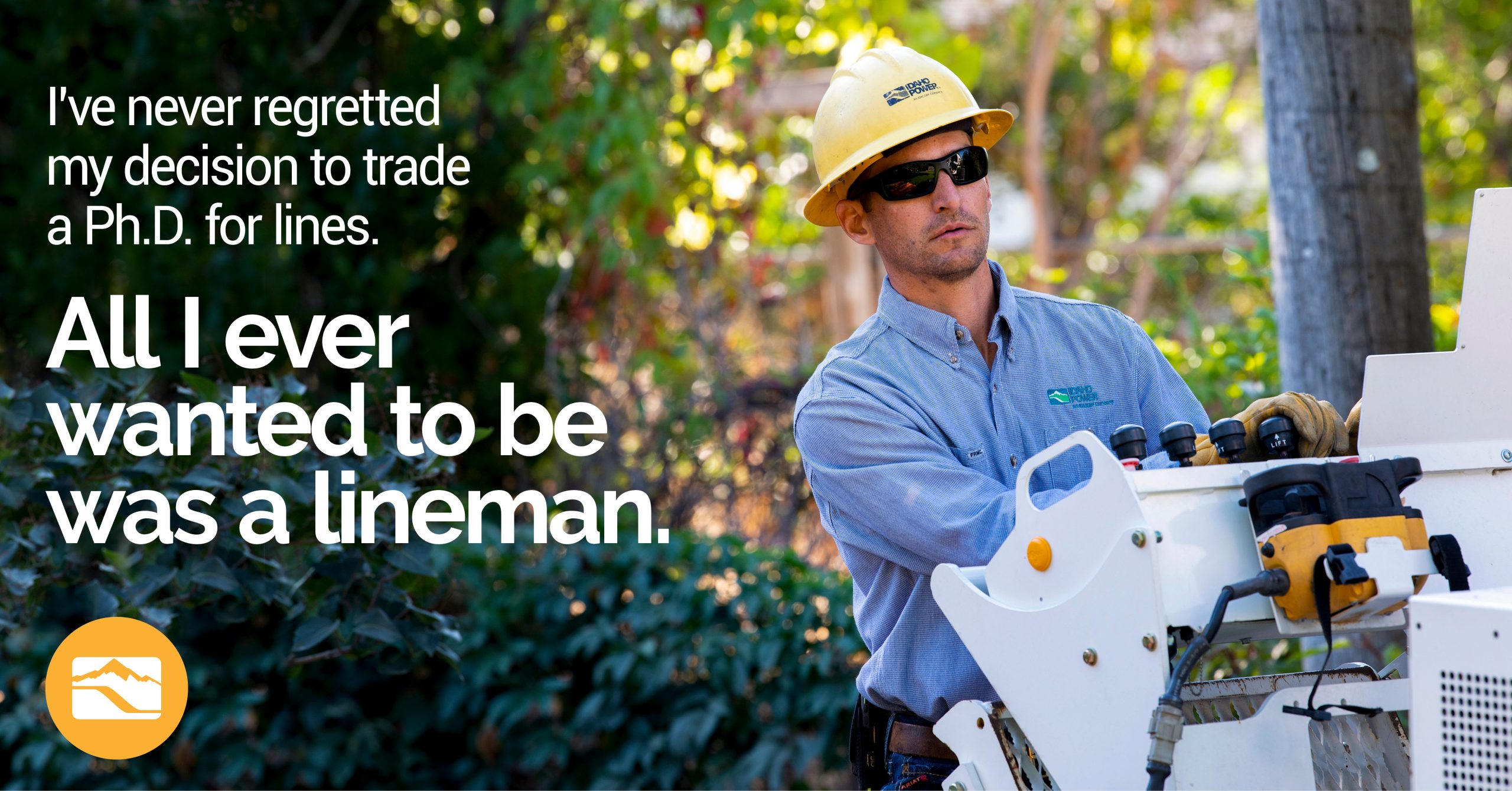 Ever since he was little, Bryan Brandel wanted to be a lineman.

“My father and grandfather were both linemen for a telecommunications company,” Bryan said. “Like most little boys, all I ever wanted was to be like my dad and grandpa when I grew up.”

But Bryan’s family had other plans for him. Citing the physical demands of being a lineman, they urged him to go to college and use his degree to get a job where he could be inside, using his mind instead of his hands. So Bryan graduated with a bachelor’s degree in biology and a chemistry minor from The College of Idaho before pursuing graduate education at the University of Colorado.

“I worked for over five years on a Ph.D. in ecology, conducting research and taking classes, before I finally admitted to myself that I wasn’t happy pursuing it as a career,” he said. “All I ever wanted to be was a lineman.”

With the support of his family, he left graduate school and completed the lineworker program at the Northwest Lineman College in Meridian, Idaho. He scored his first job at Idaho Power — a meter reader position — in 2008. He then worked briefly as a customer service representative before finally getting a job as an apprentice lineman. Bryan completed his apprenticeship in four years and worked as a journeyman lineman before being promoted to line crew foreman.

“I’ve never regretted my decision to trade a Ph.D. for lines,” Bryan said. “I absolutely love my career choice and the company I am fortunate enough to work for.”

Bryan appreciates the mental and physical challenges linework demands. It allows him to engage his mind and solve problems while using his hands to build tangible solutions. He admires the people he works with and the positive, determined attitudes they bring to work.

“The sense of teamwork and dedication to serve our customers gives me incredible job satisfaction. Working on a line crew, you face many complex challenges. But I cannot recall a single time we have ever given up. We always find a solution for our customers,” Bryan said.

Bryan said he appreciates Idaho Power’s exceptional safety culture. Everyone from the top down has a genuine passion for safety and is dedicated to constantly improving it.

“Since my first day in line school, before I even became an apprentice at Idaho Power, and until this very day, I have carried a baby picture of my oldest daughter in my wallet as a constant reminder of my passion for safety. I’ll never do anything that jeopardizes my ability to see my family at the end of the day, and Idaho Power reinforces that,” he said.

Because there are so many different jobs at Idaho Power, Bryan says there are opportunities to pursue your passions and evolve in your career. In addition to his career in lines, Bryan has been able to follow his passion for teaching and mentoring, as well as pursue his own continual growth and learning. It was the combination of his passions for lines and teaching that led him to his new role as technical skills leader. In his new role, Bryan will lead the group responsible for training Idaho Power’s linemen, substation technicians, apprentices and other employees working in the skilled trades.

Bryan’s a big fan of the company’s total rewards package, too. The compensation, benefits and retirement are very competitive, he said.

“All of these things add up to feeling valued by Idaho Power while I work to make important contributions to the company,” Bryan said. “The company’s purpose and values align with my own, and I cannot imagine ever leaving.”